Voice #12: Conversations between the mountains and clouds 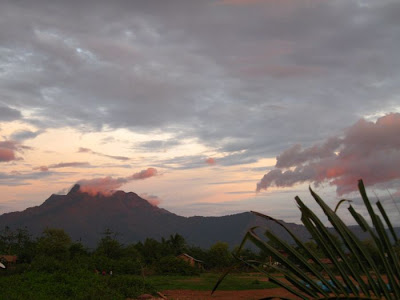 The skies after thunderstorms can be so intense. The old mountains here extend from southern Laos through northern Cambodia and NE Thailand. The stones for monuments like Wat Phou and Angkor have been dug out of these hills - red laterite stone.

It seems like the clouds and mountains are always communicating. The voice of thunder shakes the hills, drenching them with water. But the hills don't cower and shake under the forces of weather. You can tell by their body language that they are not budging.

However, this mountain couldn't talk back to one force - the forces of man. During the 'Vietnam' War, a radar tower was built on the top of the mountain. It was eventually destroyed, though there are still remains. In spite of the sheer cliffs, the site is surrounded by barbed wire, old weapons and land mines. It would be nice to go up there for the air and the views - but no road and too dangerous!
Posted by chanpheng at 9:09 PM