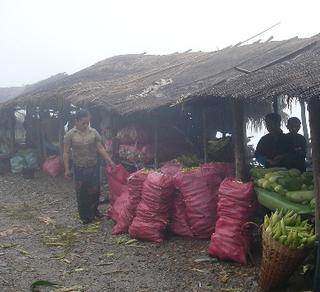 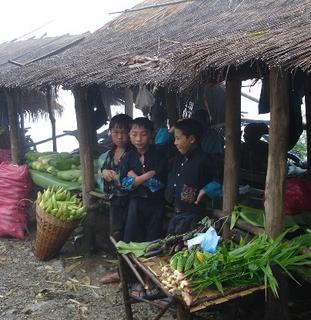 We returned from Xieng Khouang on 31 July, a drizzly cool day in the mountains. Mists streaming through the peaks, like a river of air. We stopped at a Hmong mini-mart to buy corn and cucumbers, not only the special of the day, but the only things they were selling that day. The Hmong are mountain people, and prefer to live along the sharpest ridges which have the most spectacular views, and with the solidity of the mountain behind them. Sometimes, the view isn't so great.
Posted by Khon Lao at 10:20 PM No comments:

At the end of the hot season we all wished for rain to break the relentless heat. Now, we're experiencing the relentless gray and rain of the monsoons. The Mekong surged during the week I was up in Xieng Khouang. When I returned, it looked like it had moved up the side of the levee by about two meters. The water looked like a brown liquid metal as it slid past, carrying trees, styrofoam, and things we don't want to know about in plastic bags.

But the rain. I feel lazy when it's time to wake up and the water is pounding on the roof. The clothes on the line are lazy to dry. I would like to ride my bicycle but I'm lazy to get wet.

This is also the season called khao phansaa, the Buddhist Lent. Monks are supposed to return to their home temples and not to travel around. In the past, monks often went on pilgramages where they set up a small mosquito net tent in the field, and talked to the villages, giving teaching and also learning about the hardships. In the monsoon season, they are supposed to stay in the temple and focus on learning and memorizing the scriptures. Another reason for the monks to do this is that they avoid stepping on the life that is re-emerging from the mud such as snakes, eels or frogs.

For Buddhists, the monsoon season is the time to attend to the crops. Also, people are supposed to be reflective and to follow the ha sinh, the Five Precepts - try to avoid drinking, telling untruths, sexual misconduct, killing or stealing. During this time, one should not have loud parties or weddings - and if someone has a wedding, everyone avoids mentioning that it is an emergency situation.

Anyway, at my office, we are being good this year - no alcohol. A group of us is trying to lose weight. Another group is supposed to organize Friday afternoon games for motivation. We're trying to get people to pledge money to motivate the people in these groups - the pledges will go towards our fund for the medical care of people injured by unexploded ordnance (UXO). And if the groups don't make their goals, at the end of the three months, the members of the group will donate money into the UXO patients fund.