Even though Lao is a tropical country, the winters are comparatively cold. In the mornings, I like to walk along the artery of the Mekhong River to get my blood flowing. I've gotten to know many people along the linear neighborhood that stretches 3 miles from Vat Meuang Wa to the Pakphasak intersection. The mornings have a small town atmosphere, everyone walking, puttering in their gardens and exchanging gossip. Or maybe more like a living room, with most folks wearing their night clothes, with towels wrapped around their shoulders for warmth.

As I walked, I could hear the wailing of funeral music from Sri Chiang Mai, the town on the Thai side. I believe this kind of music is designed to scare away ghosts as well as to send the spirit of the diseased to the next world. It always seems like it's coming from another universe, especially when it travels across the water.

I met the father of a friend. His wife recently died, and it seems like the whole neighborhood is caring for him. Below, he and a group of 2 other cronies would walk together in the morning. When I met them, they would be doing exercises involving swinging the arms and making deep noises in the chest. Today, he was surrounded by a group of older women, all laughing and trying to walk fast in their flipflops as they swung their arms around. My friend's father was wrapped in a jacket and a lined cap, held down by a scarf tied under his chin. It looked more like the clothes were holding him up, not that he was wearing the clothes.

He wei'd me and asked about his daughter who is up in Xieng Khouang now. He then asked me to take care of her, and let him know if she does anything wrong. I'm sure he was also affected by the music drifiting across the river. 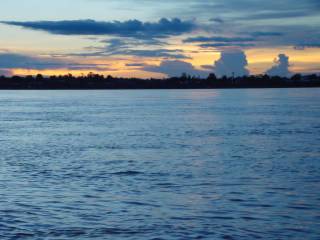 The Mekong River at Sunset 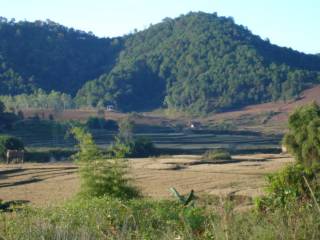 Ricefields in Xieng Khouang after the harvest

I've been doing a little research on spiders for two science ficiton stories. My experience with spiders has been from living in Xieng Khouang. When we didn't have electricity every night, even a small spider looks like a monster with long shadows in the flickering candlelight. When removed from the possibility of direct contact, I find that they are really very interesting. I had thought that the silk comes from their mouths but the silk production glands are in the abdomen. Here's what I've found:

Living in SE Asia, we get hit with New Year before most of the world. It's now 10 am on 1 January. People in NYC are just getting ready to go out for the festivities - it's 10 pm on 31 December there. It's taken a while for my friends here to get this concept - they couldn't believe that the US is in the past.

For the past few years, I've had a ritual with my friends in Xieng Khouang. I have a blow-up globe of the world with the time zones drawn on it. On 1 January, we would usually have a party at someone's house or go out to Ban Sang, Amphone's village in Kham District. I would bring the globe out with me and starting at 12 noon, we'd toast the new year in NY at 1 pm, we'd lift glasses to Chicago and Minnesota (we have friends there), and etc. This year, I stayed in Vientiane, but the world is still turning. My friends went out to Ban Sang without me. I'm just worried they'll forget to do the toasting every hour.

I just received an e-mail from a friend who had gone to Thailand for new year. I was worried that she had gone to the beach. She wrote that she doesn't like the beach in the high season (good thing) but she has been doing volunteer work in Bangkok, translating for stranded tourists who have just arrived from the areas destroyed by the tsunami in Phuket. She says their stories are pretty awful.

Last thing - on one of my e-mail lists, one of the participants noted that blogging is the literary equivilant of reality TV. I haven't decided what to think about that comment. More later!