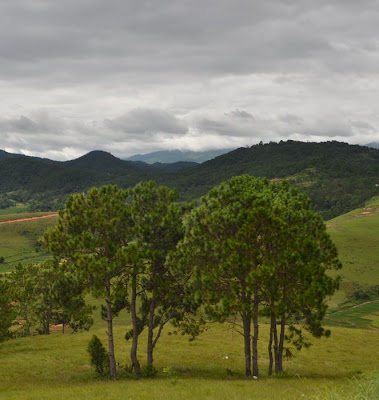 The rains are finally coming in - though too much in some places. We drove up to Xieng Khouang last Saturday and passed about 10 minor landslides along the way. None of them blocked more than half the road, though some big trees did fall down; however, the hardy local villagers had already cut up the trees and carried most of the remains away. 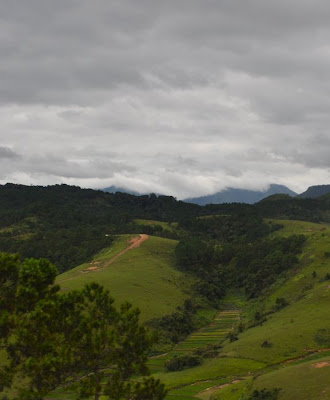 Yesterday, after some meetings, I suggested we drive up to one of the highest hills around Phonsavanh. Recently, a road appeared on the hill; I thought it was neat until I realized that something would be built up there. As we enjoyed the view, we looked down on the foundations for a new hotel. The top two photos are from the top of the hill. 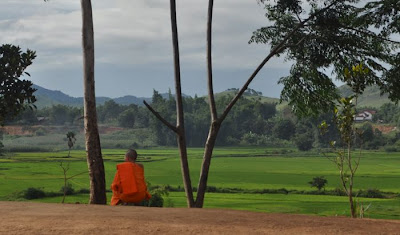 Yesterday, I joined my staff for a special blessing ceremony for our truck, which was in a minor accident a few days ago. No one was hurt - a motorcycle hit the side of the truck and fortunately, the rider was wearing a helmet. So we went to a local temple for a ceremony - however, the special bee's wax candle, which the person measures around the head, the length of the forearm, and the collar bone to the belly button, didn't light. So K. drove back to market and I walked around the temple. The monk performing the ceremony took a moment to contemplate the view. 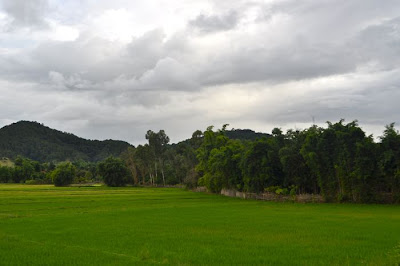 Near my house - the rice is starting to take root. 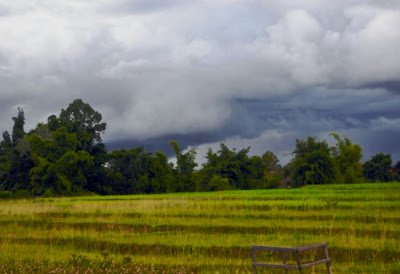 Hope you enjoyed my photos. This is my contribution to Skywatch Friday, whose members post pictures of the skies around the world.
Posted by chanpheng at 9:47 PM 3 comments: 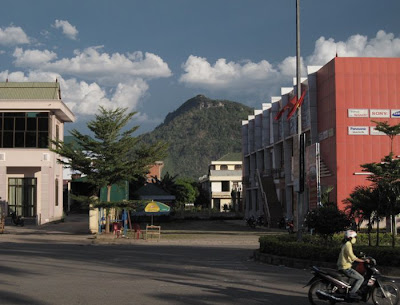 I just finished two weeks of field visits in Vietnam. On our last day, we drove up to Lao Bao, the Vietnamese side of the border crossing to Laos. Both sides of the border have big markets so people, even if they're not crossing over, go for shopping, to see what kinds of deals they can find.

The town itself is pretty ugly and there wasn't much interesting in the shops. However, the scenery outside town is beautiful. 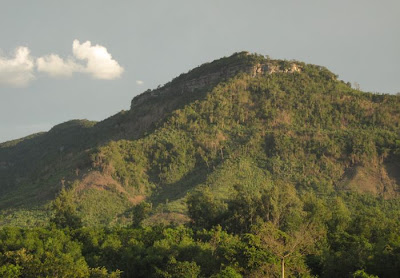 The other side of this hill is the Sepon River, the border between Laos and Vietnam. Not too far from home. 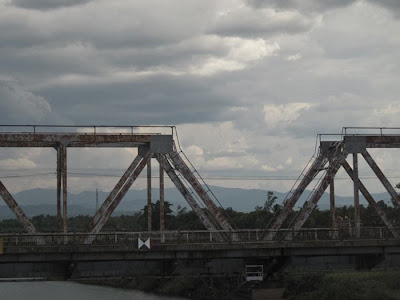 We traveled to Hue, in Central Vietnam, with a rain storm to the west of us. We didn't get wet. 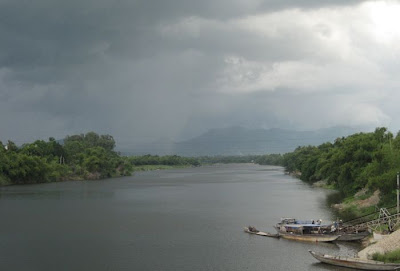 The central provinces are very poor. Many of the communities upstream were wiped out during Typhoon Ketsana last year - and now they are suffering drought. During our trip, we saw many fields which were brown and rock hard, with blades of green rice plants standing up. I hope the rains got to those fields. 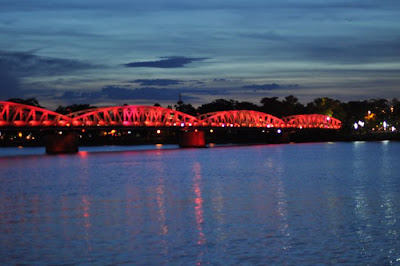 We reached our destination on Saturday - Hue, the site of the ancient city which was destroyed during the Vietnam War. The bridge on the Perfume River is lit up at night with lights that change colors.


Hope you enjoyed my photos. This is my contribution to Skywatch Friday, whose members post pictures of the skies around the world.
Posted by chanpheng at 4:17 PM 1 comment:

Did I really miss SWF last week? I thought I had some photos, but in my frenzy with this evaluation, I guess I spaced it out. Well, here are some photos around Vietnam this week. 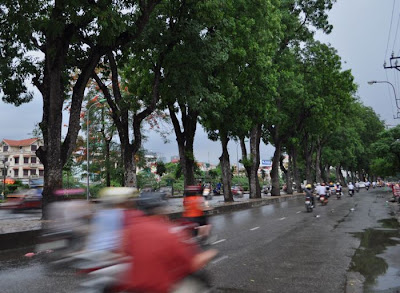 I arrived in Hanoi. Usually I stay in the old quarter but the organization I'm consulting for, has moved their office to south central Hanoi. Less crowded (though you wouldn't know by this photo) but there are many small neighborhoods filled with quiet and trees. 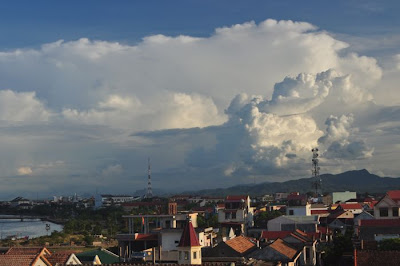 We traveled to Dong Hoi, along the central coast. Like much of central Vietnam, it was bombed during the war. It's a very peaceful city now - off the main roads, it's hardly like being in Vietnam at all; no traffic and noise! However, construction projects still unearth unexploded ordnance. 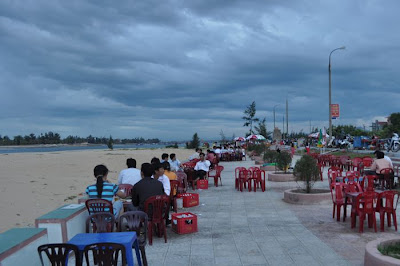 Dong Hoi is at the intersection of the Nhat Le River and the ocean. Nhat Le means 'tears of the sun,' not sure of the legend that contributed to this name but it is beautiful. The ocean beach itself is very nice and we had snacks there one night. When we sat down, we decided it was worth the risk that it might rain. We didn't didn't expect that it would rain, but five minutes later, it really came down. We huddled under large umbrellas while we gulped beer and ate squid. Five minutes later, it stopped. 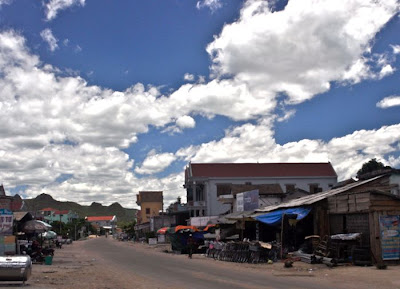 We went out to some remote areas after that, to interview villagers about the impact of the program I'm evaluating. The town itself was not very impressive - but the sky! 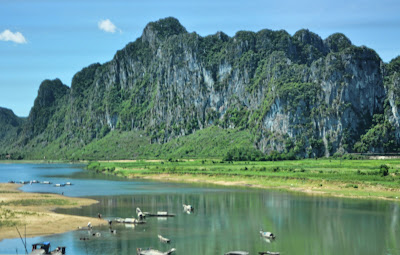 The town lies in a river valley surrounded by limestone cliffs. I could have stayed there for several more weeks, but we had to move on....


Hope you enjoyed my photos. This is my contribution to Skywatch Friday, whose members post pictures of the skies around the world.
Posted by chanpheng at 2:07 PM 10 comments: