4 Baci ceremonies and a funeral

The Lao new year started on 7 April and finished on the 19th. The way to celebrate the new year is to visit, go to a lot of parties, and go to Baci ceremonies. It was entirely too hot to stay in Vientiane, so I went up to Xieng Khouang. The elevation of Phonsavanh, the capital, is about 4,000 ft. so the weather is cooler, drier and breezy.

I arrived on Friday after enjoying a few baci ceremonies in Vientiane. These ceremonies are done at various times of the year for a variety of reasons. The purpose of having a Baci is to call back the minor souls of the body. Depending on who you talk to, there can be three (which includes the spirts of the body, the mind and the emotions) or as many as 32 (one for each of the sense organs and etc.; I've never been able to track down a full list). For various life events, you need to hold onto your souls (weddings, after an illness, arrival to a place, departures, moving to a new house, etc.). In addition, ceremonies for the new years (which starts in December with the international new year, continues through the new year of the Chinese, Tai Dam, Vietnamese and Mien, and then finishes with the Lao/ Thai/ Khmer new years in April) are times to "get off the bad luck and welcome in the good luck."

For most of the ceremonies the schedule is similar. The Mor Phone (wish doctor) recites Buddhist prayers, might recite a fable or a story about one of the past lives of the Buddha and recites good wishes for the person who is having the Baci as a way of enticing the souls to return. This is followed by a free-for-all while all the guests tie strings on each other, bestowing wishes on each other, both normal and outrageous. Fruits or cakes are placed in one of the hands of the recipiant while the other is held in a wei-position of giving thanks. The Lao like to use two oranges (or two eggs) and a banana (go figger).

I was finishing the review of a grant proposal at about midnight, when I started to hear weird noises outside my house. Later, I heard a car at my neighbors. My neighborhood in XK is quiet. The following morning I learned that a doctor I've worked with over the past eight years had been run over by a drunk teenager on a motorcycle. That made the rest of the holiday very sad, though it made myself and all my friends appreciate our time together.

For the rest of the holiday, we went to visit friends in Phoukout, in the western part of the province. My friends' relatives emptied their fish pound so we had a feast of grilled fish. The kids enjoyed themselves by throwing water on everyone, including people driving on the road.

The water throwing comes from the idea of washing away the bad of the past year while purifying oneself for the good of the new year. It usually starts gradually, with a young person pouring a few drops of the blessing water, used by the Mor Phone during the Baci ceremony, down the backs of the elder people or over their hands. As the heat of the afternoons wears on, everyone throws water on each other.

In the evening, my neighbors had another Baci. Since so many people return to their home towns during the new year, the Mor Phone conducts part of the ceremony in the kitchen or in the house using the sticky rice steamer as the symbol for the hearth.

The following morning, there was - you guessed it - another Baci ceremony at a friend's mother's house. That was enough, I had strings tied up to my elbows on both arms (they have to be left on for three days, then you can start picking them off, but they have to be untied, not cut).

At the end of the weekend, I went to visit my deceased friend's wife. That was very sad. I couldn't stay for the final day of the funeral and the cremation.


The following two sites tell a little bit about the ceremony and have pictures.

Chanpheng
Posted by Khon Lao at 2:38 PM No comments:

Lao New Year officially started yesterday. In the morning, people walked to the wat to offer food to the monks then wash the cheddhi housing the ashes of deceased relatives. Many people have Baci (string tying ceremonies) in the late morning. That's when the fun (?) begins - haut nam meaning throwing water, using the same word for watering plants. It usually starts with using a tree branch and flowers to dip in perfumed water and sprinkled on the guests for wishing of good luck. Later, one pours a little bit of water down the back of a guest's shirt and rubs the back of the shirt to rub in the good luck. Just a little bit later (and just a little bit more alcohol later), the container with the perfumed water gets dumped on someone's head. That's the signal to pull out water pistols, complicated Flash Gordon-style water canons and hoses for a free for all. Everyone gets drenched. The next step after that is to take the water fights to the street.

Yesterday, I drove home from the office and cut down a side street. Some kids stood in the middle of the road. I stopped and one young lady asked if she could give a small water offering. So she patted some water and perfumed talcum powder on my face. Another girl joined her and did the same. I didn't notice that a third person snuck up behind them until a whole basin-full of water entered the truck. Agghhh.

As I drove back to the office today, parties of drunk kids of all ages were throwing water all along the Luang Prabang road. My plan was to leave the truck then take a tuk-tuk, a small open sided motorized vehicle, back to the airport. I realized that the water fighting was not a good thing for my computer, so I called a friend who was making the circuit of parties and temples. So I ended up at the airport three hours early - but dry. I sat, drank a beer and wrote, even got in two hours of editing.

It's lovely up in Xieng Khouang now. The sky is clear, the stars are out and I'm happy to be in my little house. The kids are doing an amazing job with planting all sorts of flowers around the house. And I was relieved to find that Khamdee had not cut down the big trees behind the house, just trimmed back the branches a little.
Posted by Khon Lao at 10:30 PM No comments:

Although Lao New Year doesn't start - officially - until 14 April, everyone's in party mode right now. Last night there was a party. I went to a party at Friendship Hospital today, and my calender is getting marked up with all the events which will be occurring over the weekend.

I've got to spend some time rememorizing the new year song.
Posted by Khon Lao at 5:01 PM No comments: 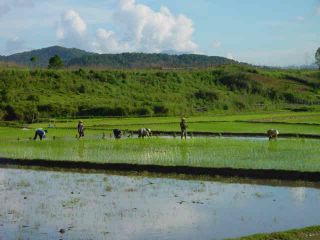 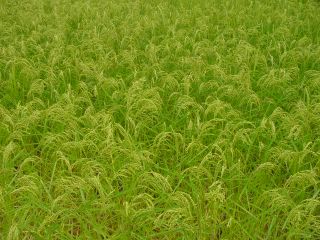 Strange weather here. At this time of the year, we're starting to go crazy from the constant dry heat. Any movement of the air stirs up the dust, and sometimes a cloud will fly overhead, discharging a few hard drops of rain which plop in the fine dust, making small craters. This year, a gust of cold weather from China blew in rain clouds and now it feels like the month of May, clammy and cold with drizzle.

The Mekong River has grown, and the mysterious island which appeared in February and now back in the depths. The beautiful old boat which was destroyed when it tipped over, has been dismantled. A few old boards remain where the pier used to be.

It's good to be back home, but I still feel a little disoriented. I enter my house and walk around. Is this really where I live? The strangest places are those familiar ones that we return to after an absence.
Posted by Khon Lao at 4:28 PM No comments: