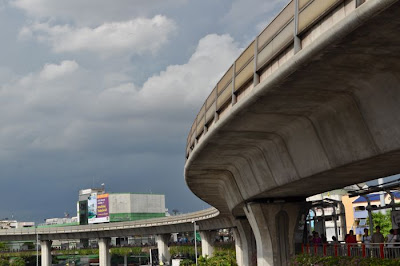 These two weeks involve a lot of traveling. I took the night train up from Bangkok on Sunday and arrived in Vientiane on Tuesday. The photo above is the bends of the elevated train, known as the Skytrain, in Bangkok. It's a very convenient and low-cost way of beating the traffic in Bangkok. 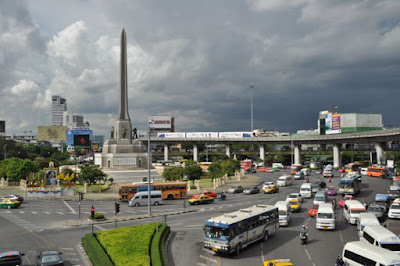 You can just see the Skytrain rounding the traffic circle (under the Canon sign) around Victory Monument. 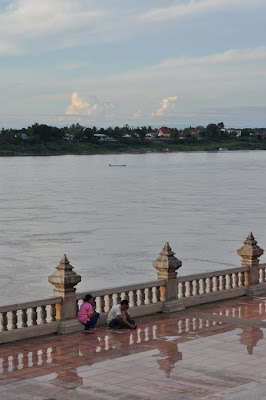 I arrived in Nong Khai on Monday morning and enjoyed relaxing in this quiet town on the banks of the Mekong River. I talked to someone who has lived in the town for ten years and we reminisced about the town in the past. The waterfront has been restored, with a nice walking park on top of the bank. I watched some kids skateboarding and also, this couple who were having an intense conversation with frequent attempts to call someone on their cell phone. 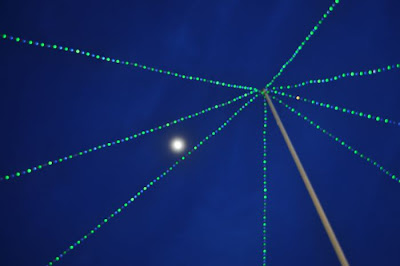 Later on, I went to a waterfront restaurant and saw the moon in relation to these light chains. Took a few shots but I enjoyed the outcome. 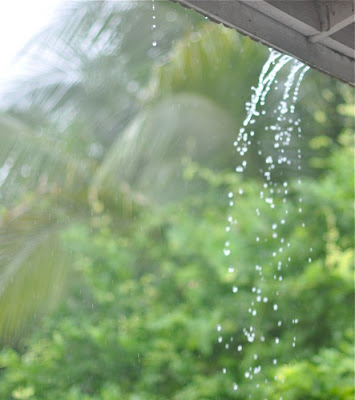 The following morning, I woke to the sound of rain. The sky was coming down, drop by drop. Some friends came by and picked me up to bring me back to Laos.

I hope that next week, I'll be able to find a wireless connection to send some photos from the skies of Vietnam.


Hope you enjoyed my photos. This is my contribution to Skywatch Friday, whose members post pictures of the skies around the world.
Posted by chanpheng at 5:10 PM

I love the moon picture.

Hard to imagine, just 2 months ago, that shot of Victory Monument would have yielded quite a different image...

Ana Around the World said...

Love the photo of rain falling down from the roof. Lovely:)

Love your photos. I have been going thru your posts - very enjoyable.