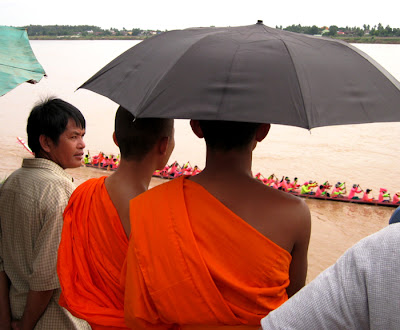 The festivities around the boat races continued at a frantic pace all day. After I returned from the office, one of my neighbors came running over to my house with a bowl of Khao Phung, a spicy curry made with coconut milk over fermented rice noodles with fresh vegetables. After being refreshed with lunch I walked along the levee, going to the river side when I noticed that people were looking out over the river and jumping up and down. Last year, I had a much better idea of the villages and the rowers in the festival but since I've been upcountry so much, I've been out of touch.
One thing I was amazed to see was that there were corporate sponsorships of several boats. Last year, one of the villages around my temple had made their own boat. Although it was an amazing process of hollowing out and carving the log and making struts to support it, the boat was slightly twisted, so it took on water easily. It didn't get too far in the races last year because some of the rowers had to bail. This year I saw the bowl sporting a "Nissan" plaque instead of the name of a village. I was scandalized. Then I noticed that the EU had sponsored a boat - they all had on the blue tees with a pattern of the circle of gold stars for member countries. They also had their own tent and band by the river side. 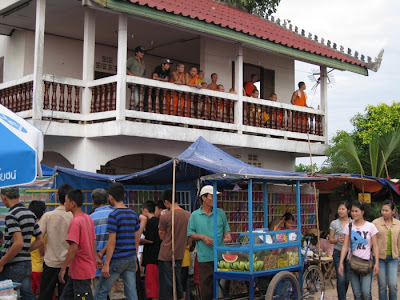 The problem with corporate sponsorship is that they tend to draw from a wider range of people within their offices rather than people in a village. And the competition becomes less for for and more for profit and maybe exposure for the organization. 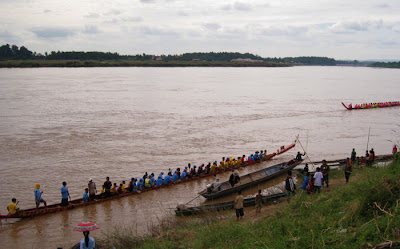 I was about halfway between the start and the finish lines when they had the last race - between the EU and a local village boat. And the village boat won!
Posted by Khon Lao at 9:30 PM